WAYNE ROONEY faces an awkward reunion with Jamie Vardy when Derby host Leicester in a pre-season friendly. The former England team-mates were pitted

The former England team-mates were pitted on opposite sides during the Wagatha Christie trial involving their respective wives.

The ex-Manchester United captain claimed during the hearings that he had sat down with the Leicester legend during Euro 2016 to try and get Rebekah to "calm down".

He said: "They asked me, as captain, would I be able to speak to Mr Vardy on issues regarding his wife.

But Vardy denied the conversation even took place. 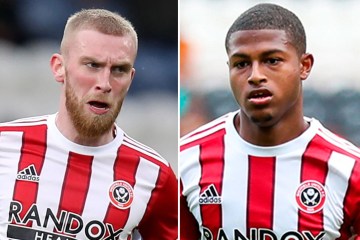 In a statement outside the High Court, he said: "Wayne is talking nonsense.

"He must be confused because he never spoke to me about issues concerning Becky's media work at Euro 2016.

"There was nothing to speak about, I know this because I discuss everything with Becky."

And as Coleen and Rebekah have battled it out in court, Wayne and Jamie will be making preparations for their own trial at Pride Park.

Most read in Football

The East Midlands rivals are due to face off on Saturday, July 23.

That is despite Rooney's Rams only having seven contracted players - and the Foxes also playing at Preston on the same day.

Crisis-club Derby were relegated from the Championship last season amid their financial woes, dropping into the third tier for the first time since 1986.

So the visit from the Premier League Foxes will come as a much-needed boost to the coffers.

But just ten minutes after full-time at Derby, Leicester will kick off again - 108 miles north at Deepdale.

Brendan Rodgers intends to split his first-team squad between both games, as he has done during previous pre-seasons to bump up his players' game time.

And so that could mean the manager avoids the showdown entirely by shipping his No9 off to Lancashire instead.

Leicester get their new Prem campaign underway on Sunday, August 7 at home to Brentford - with the game pushed back to avoid clashing with the city's Caribbean Carnival.

What you think about this story?
Wayne Rooney faces awkward Jamie Vardy reunion after Wagatha Christie trial with Derby to face Leicester in pre-season

Easy Branches Worldwide Network provide the possibility and allows You to contribute Your Guest Post on different websites and languages, pointed to any City or Country